Overall market sentiment stabilize in Asia today, with Nikkei leading other major indexes higher. Bitcoin is trading back above 20k, arguing that the climax of the crypto rout is over. In the currency markets, both Dollar and Yen are paring some recent gains while commodity currencies recover. But for the week, Yen is still the strongest, followed by the greenback and then Canadian. Aussie is the worst performer, followed by Kiwi and then Euro.

Technically, EUR/USD is now in proximity to 2017 low at 1.0339. There is no sign of bottoming yet and break of this low is likely. The main question is whether downside momentum will pick up further, and the reaction to parity. This will be the main focus for the rest of May. 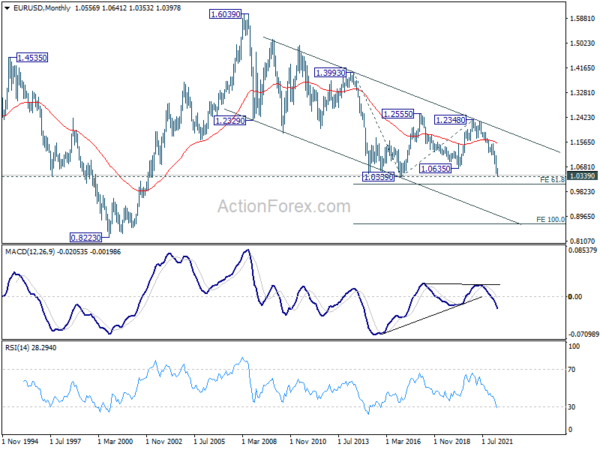 Fed Powell: Appropriate for 50bps increases at the next two meetings

Fed Chair Jerome Powell said in an interview that “what we were actively considering, and this is just a factual recitation of what happened at the meeting, was a 50-basis point increase… if the economy performs about as expected, that it would be appropriate for there to be additional 50-basis point increases at the next two meetings”.

Powell also said that a “soft landing”, getting back to 2% inflation while keeping the labor market strong, is “quite challenging to accomplish that right now”. Unemployment is “very, very low”, the labor market’s “extremely tight”, and inflation is “very high”.

“What we can control is demand, we can’t really affect supply with our policies. And supply is a big part of the story, here. But more than that, there are huge events, geopolitical events going on around the world, that are going to play a very important role in the economy in the next year or so. So the question whether we can execute a soft landing or not, it may actually depend on factors that we don’t control,” he explained.

Fed Daly: Going up in 50bps increments makes quite a bit of sense

San Francisco Federal Reserve President Mary Daly said yesterday she’d like to Would like to see continued tightening of financial conditions to help bring down inflation. Yet, 75bps rate hike is “not a primary consideration”.

“Going up in 50-basis-point increments to me makes quite a bit of sense and there’s no reason right now that I see in the economy to pause on doing that in the next couple of meetings,” she added.

BoC Gravelle: We need higher interest rates, the economy can handle it

BoC Deputy Governor Toni Gravelle said yesterday, “our policy rate, at 1%, is too stimulative, especially when inflation is running significantly above the top of our control range. We need our policy rate to be at more neutral levels.”

“Simply put, with demand running ahead of the economy’s capacity, we need higher interest rates to cool domestic inflation. And as we’ve said before, the economy can handle it,” he said.

Still he noted that outlook remained unusually uncertain and therefore it’s not easy to hike by 75bps in one go.

On the data front

New Zealand BusinessNZ PMI dropped from 53.7 to 51.2 in April. Japan M2 rose 3.6% yoy in April. Eurozone industrial production will be featured in European session. US will release import price index and U of Michigan consumer sentiment later in the day.

Intraday bias in AUD/USD stays on the downside for the moment. Current fall is part of the decline from 0.8006 and should target 0.6756 medium term fibonacci level next. On the upside, break of 0.7029 support turned resistance will turn intraday bias neutral again first. But outlook will remain bearish as long as 0.7265 resistance holds. 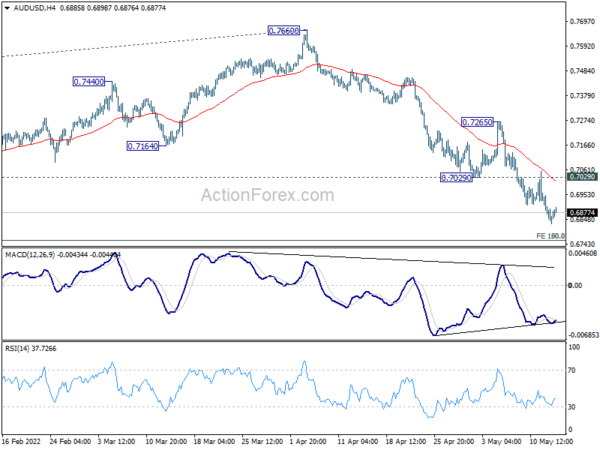 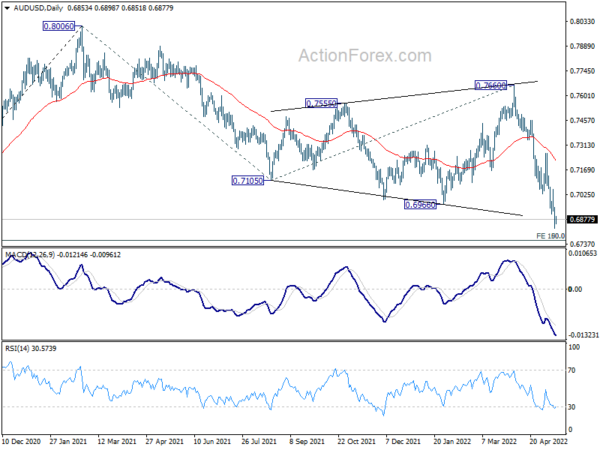 Aussie Has a Big Outsized Day

Aussie Has a Big Outsized Day