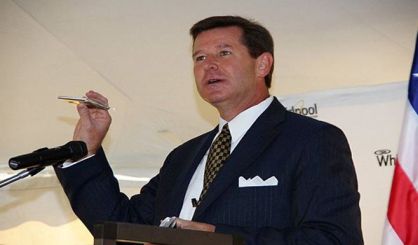 Jeff Noel, who you might know as the longtime face of Whirlpool Corporation, has been selected by the governor of Kentucky to serve as the state secretary of the Cabinet for Economic Development. Neol is retiring from Whirlpool at the end of this month. The office of Kentucky Governor Andy Beshear has released the following:

John Hicks will step into the role of Governor’s executive cabinet secretary while continuing to serve as state budget director. The Governor named Jeff Noel as the new secretary of the Cabinet for Economic Development.

Gov. Beshear said that Secretary Brown has helped lead the executive branch through some of the most trying times in recent history, as the commonwealth faced a once-a-century pandemic and multiple natural disasters, including flooding, ice storms and the deadliest tornadoes in the history of the commonwealth.

“I am forever grateful for the guidance and friendship I have received from Michael. His leadership while I served both as attorney general and as Governor has been invaluable to me, my family and everyone on Team Kentucky,” Gov. Beshear said. “Simmons College has made a great decision to hire Michael to mentor the next generation of students and help shape the future at our state’s only private HBCU. We congratulate Michael and his family on this next phase in their lives.”

“My decision to leave private practice and join state government in 2007 under Gov. Steve Beshear was an easy one. After eight years as the Justice and Public Safety Cabinet secretary, I was given the opportunity to serve another Beshear. First in the Office of the Attorney General and now as the secretary of the Executive Cabinet,” said Secretary Brown. “Leaving Andy Beshear’s administration is a difficult decision but is one that was prompted by a once-in-a-lifetime opportunity to join President Kevin Cosby at Simmons. I can think of no better use of my experience and training than to help to prepare the careers of the young students at our only private HBCU.”

Brown added: “I want to thank all of those who have worked with me these last 14-plus years and I leave with countless memories. The commonwealth has never been in better hands than with Gov. Andy Beshear and his leadership team. I look forward to my next adventure at Simmons.”

Secretary Brown recently served as deputy attorney general under then-Attorney General Andy Beshear and as secretary of the Justice and Public Safety Cabinet for eight years before that. A former district court judge in Jefferson County, he was law director for the City of Louisville, an assistant commonwealth’s attorney, and served on the board of the Louisville Regional Airport Authority for 12 years, including six years as the board’s chair. Brown was the first African-American elected president of the Louisville Bar Association and chaired the Kentucky Bar Association’s Task Force on Minorities. He is a military veteran and former member of KBA’s Ethics Committee. He received his J.D. from the University of Louisville School of Law.

“What makes a great college is stellar faculty and pathways to success,” President Dr. Kevin Cosby said. “The first law school opened to Blacks in the state of Kentucky was Simmons College. Under the leadership of one of America’s brightest minds, J. Michael Brown, our hope is to begin a bachelor’s degree in interdisciplinary studies with a concentration in pre-law and constitutional studies. J. Michael Brown will bring his years of experience to the creation of this initiative.”

The Governor congratulated State Budget Director John Hicks on also being appointed to serve as executive cabinet secretary, the Governor’s top appointee. As state budget director, Hicks helped the Governor navigate the budget challenges brought on by the pandemic and is helping lead the efforts to distribute billions of dollars in federal relief aid. Through strong fiscal management, the Governor’s administration created the best budget in 20 years. Kentucky saw an all-time, record-setting budget surplus in fiscal year 2021 and entered 2022 with an estimated $1.9 billion more than budgeted. Just this week, Hicks announced that April’s General Fund receipts of $1.84 billion are the highest monthly amount ever. Receipts were up 34.9% over last April’s collections, bringing the year-to-date growth rate to 16.4%.

“John has been an invaluable member of my administration, and I am pleased to have him step into this new role,” Gov. Beshear said. “John’s skills and expertise are vast and having his steady and experienced leadership as executive cabinet secretary will only help us continue to build a better, stronger Kentucky for all our families.”

“I am honored and excited to serve the Governor in this new role. I have been involved in Kentucky state government for most of my 38-year career. I have dealt with all of Kentucky state government’s agencies in some form during that time,” said Hicks. “Kentucky was a leader when it established the cabinet structure of government almost 50 years ago. It has worked well. I look forward to assisting the Governor with the cross-agency collaboration necessary for the efficient and effective provision of services to Kentuckians. Gov. Beshear expects a high level of performance from our state government, and I pledge to support that aspiration.”

The Governor also thanked Secretary Larry Hayes for his 20-plus years of service to the Commonwealth of Kentucky, which spans more than four decades.

As part of Gov. Beshear’s administration, Secretary Hayes helped the commonwealth shatter every economic development record in the books in 2021. And in September 2021, Gov. Beshear and leaders from Ford Motor Co. and SK Innovation celebrated the largest economic development project in state history: a transformative $5.8 billion investment that will create 5,000 jobs in Hardin County. The economic momentum has continued strongly into 2022, and last month, the Governor was joined by leadership at Envision AESC to announce a $2 billion investment that will create 2,000 jobs in Warren County. These announcements solidify Kentucky as the national leader in EV battery production. Under Beshear’s administration to date, private-sector companies have announced well over 600 new location and expansion projects totaling more than $17 billion in new investments and more than 32,000 jobs.

“Larry has been at the forefront of some of the most significant economic development projects in the commonwealth’s history, from Toyota in the 1980s to the recent record-breaking Ford and Envision AESC announcements, which make us the electric vehicle battery production capitol of the United States of America,” Gov. Beshear said. “Larry has always worked behind the scenes to move Kentucky forward – and the commonwealth is a better place to live, work and do business because of his work. We wish him the very best as he takes time to spend with his family and grandchildren.”

“It has been an honor to serve the people of Kentucky and to see firsthand the tremendous growth of our state. Thanks to Gov. Beshear’s leadership, Kentucky is better positioned now for the future than at any other time since I’ve been involved with state government,” Secretary Hayes said. “The commonwealth is primed not only to be a player in the economy of tomorrow but to lead the way as a destination for growth-minded companies looking to create quality job opportunities. With the Governor’s vision and the experience and expertise Jeff Noel will bring to the cabinet, I know they will continue to build on the incredible momentum we have established. The future is brighter than ever in Kentucky.”

Jeff Noel is corporate vice president of communications and public affairs at Whirlpool Corporation, where he is responsible for the company’s global external and internal communications, government relations, public affairs and business travel departments. Noel also served as the president of Whirlpool Foundation, which includes oversight of the company’s 20-year relationship with Habitat for Humanity, which has touched over 200,000 families.

Before joining Whirlpool, Noel served for 11 years as president of Cornerstone Alliance, a Benton Harbor-based…

Why It’s A Bad Idea To Reuse Margarine Tubs

Storage that goes well beyond the utilitarian