US equities and digital currencies dipped on Monday as investors refocused on the upcoming quarterly results by leading American companies. Banks like JP Morgan, Citigroup, and Wells Fargo are expected to publish weak results even after the Federal Reserve delivered its first interest rate hike since 2018. The performance happened as the bond sell-off accelerated, with the 10-year rising to a multi-year high of 2.76% and the 30-year rising to 2.80%. Technology stocks like Nvidia, AMD, Coinbase, Microsoft, and Snap were the biggest losers. Energy stocks like Occidental and Conocophillips also lagged. On the other hand, the CBOE VIX index and airlines like American and United rose.

The US dollar rose as the inflation outlook rose to a new record high. Data published by the New York Federal Reserve showed that the median one-year inflation expectation rose to 6.6% from the previous 6%. Respondents expect that inflation will be at about 3.7% in the next three years. This situation was caused by the elevated oil and gas prices and the ongoing crisis in Ukraine. These numbers came two days ahead of the upcoming official consumer inflation data scheduled for Wednesday this week. Economists expect the data to show that consumer prices jumped to over 8% in March.

The British pound went sideways after the latest UK GDP numbers that were published on Monday. The numbers revealed that the UK economy made a modest recovery in February as the impact of the crisis in Ukraine emerged. The currency will be in the spotlight on Tuesday as the UK publishes the latest jobs numbers. Economists expect the data to show that the country’s unemployment rate declined from 3.9% to 3.8%. They also saw the average earnings plus bonus rise from 4.8% to 5.4%. Without bonuses, they see wages rise from 3.8% to 4.0%. Other key data to watch on Tuesday will be the German and US consumer inflation data.

The EURUSD pair moved sideways ahead of the upcoming US and Germany inflation data. It is trading at 1.0833, where it has been in the past few days. It remained between the key support and resistance levels at 1.0848 and 1.0935, respectively. The pair moved slightly below the 25-day and 50-day moving averages while the MACD made a bullish crossover pattern. The Relative Strength Index (RSI) has also been rising. Therefore, the pair will likely have a bullish or bearish breakout ahead of the US and Germany inflation data. 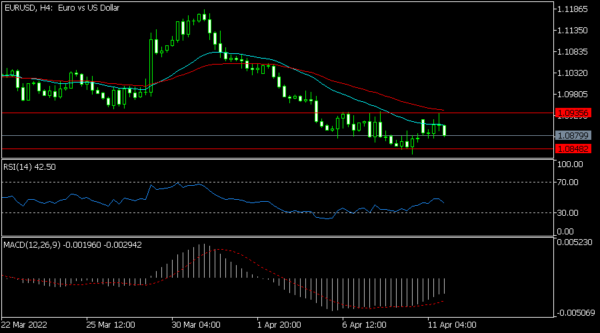 The EURCHF pair declined sharply during the Asian session. It moved to a low of 1.0125, which was the lowest level since March 8. On the four-hour chart, the pair moved below the short and medium-term moving averages. It also dropped below the key support level at 1.0128, which was the lowest level on April 6th. The pair will likely keep falling as bears target the next key support level at 1.000.

The XNGUSD pair maintained a bullish trend as demand for natural gas rose and supply fell. It rose to a year-to-date high of 6.60, which is above the upper side of the ascending channel. It has moved above the 25-day and 50-day moving averages. The RSI and MACD have pointed upwards. The pair will likely keep rising this week. 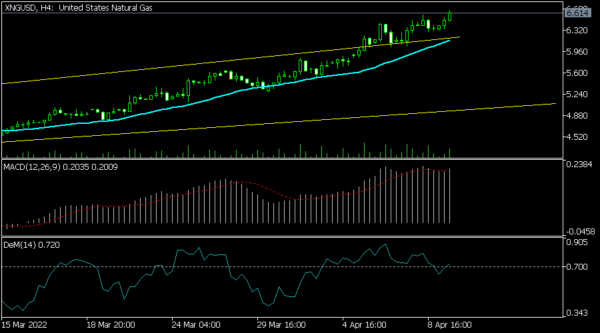